TCKFA’s philosophy is to blend both external and internal (hard and soft) forms of traditional kung fu. Through this training, one obtains maximum benefit (physical strength, health and balance) from the hard and cardiovascular Shaolin training, as well as the flexibility and balance of the internal styles. The external style practised at TCKFA follows the five animals system (Wu Xing), which originated from the Shaolin Temple in the Henan Province.

The Wu Xing system is part of the compendium of the Shaolin arts denominated “Shaolin Chuan Fa”, which literally translates to “The Way of the Shaolin Fist”.

This is a complete combat system, developed over many centuries throughout the history of the martial arts in China. Wu Xing is a complete system, which includes:

The explosive and fast techniques employed in Shaolin Wu Xing training draw their power from circular movements, which require a full body involvement in each application. This external fighting style is further complemented at TCKFA with the highly specialized internal arts (internal energy oriented) developed in Wudang, including the following:

From this comprehensive training programme, students have the opportunity to explore and apply those areas that best suit each individual’s strengths and physical abilities.

Mr. Cristian Gomez has a 1st Dan Black Belt in Kung Fu and a certified instructor in Australasia. Cristian’s experience in martial arts began when he was only 5, receiving his initial training from his father, a black belt in Kenpo Karate (as taught by Grandmaster Ed Parker). Later on, in his teenage days, Cristian went on to study Kyokushinkai Karate, a form of Japanese Karate developed by Grandmaster Mas Oyama. During his time in the military, Cristian studied Tae Kwon Do, Judo and Western Boxing, and became involved in competitive Tae Kwon Do training for several years. Ultimately, Cristian’s study of the martial arts took him to the root of many of the forms of eastern martial arts, Shaolin Kung Fu, in which he received his 1st Dan Black Belt and certification as an instructor from the hands of Grandmaster Robert Gemmell. 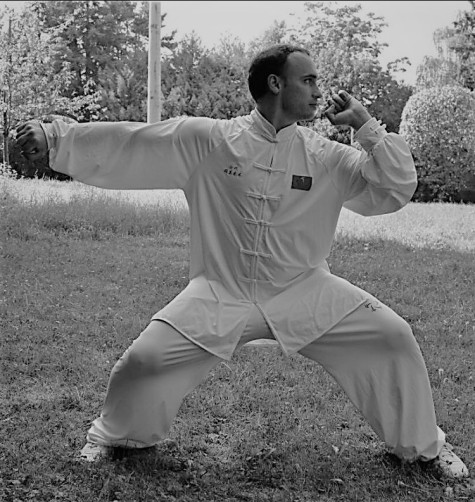 Maxime Rittener is the world champion in Baji Quan. He has been practicing Baji Quan for 15 years and he is officially mandated by the Wu family to teach their Baji quan in France. Maxime was a student of Master Liu LianJun, who himself was the student of the inheriter of the style, Wu LianZhi. Maxime has also won many international competitions and was crowned world champion of IWUF in 2012.

Bruno has been practicing different styles of Kung Fu for almost 20 years (Hun gar, Shaolin, Yi chuan and Baji). He has the 1st Dan Black belt in France since 2010.